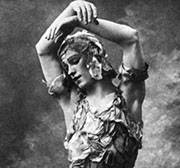 Nijinsky is cited as the greatest male dancer of the early 20th century. He grew to be celebrated for his virtuosity and for the depth and intensity of his characterizations. He could perform en pointe, a rare skill among male dancers at the time and his ability to perform seemingly gravity-defying leaps was legendary.

Nijinsky was introduced to dance by his parents, who were senior dancers with the travelling Setov opera company and his early childhood was spent touring with the company. Aged 9 he joined the Imperial Ballet School in St Petersburg, the pre-eminent ballet school in the world. In 1907 he graduated and became a member of the Imperial ballet starting at the rank of coryphée instead of in the corps de ballet, already taking starring roles. The choreographer and dancer Bronislava Nijinska was his sister and worked with him much of his career.

In 1909 he joined the Ballets Russes, a new ballet company started by Sergei Diaghilev which planned to show Russian ballets in Paris, where productions of the quality staged by the Imperial ballet simply did not exist. Nijinsky became the company’s star male dancer, causing an enormous stir amongst audiences whenever he performed, although in ordinary life he appeared unremarkable and even boring to meet. Diaghilev and Nijinsky became lovers, and although Nijinsky had unparalleled ability, it was the publicity and opportunity provided by Diaghilev’s company which made him internationally famous. In 1912 Nijinsky began choreographing his own ballets, including L’après-midi d’un faune (1912), Jeux (1913), and Till Eulenspiegel (1916). At the premier of Le Sacre du Printemps (1913) fights broke out in the audience between those who loved and hated a totally new style of ballet. Faune frequently caused controversy because of its sexually suggestive final scene. Jeux was originally conceived as a flirtatious interaction between three males, although Diaghilev insisted it be danced by one male and two females.

In 1913 Nijinsky married Hungarian Romola de Pulszky while on tour with the company in South America. She had seen the Ballets Russes perform in 1912 and thereafter ‘stalked’ the company and Nijinsky. Nonetheless, no one was more surprised than she was when Nijinsky asked her to marry him, in broken French since neither was fluent in the same language. The marriage caused an immediate break with Diaghilev, who dismissed Nijinsky from the company. With no alternative employer available, he attempted to form his own company but this was not a success. He was interned in Hungary during World War I under house arrest until 1916, finally being allowed to leave after intervention by Diaghilev, who wanted him to perform in an American tour, and supported by calls for his release from Alfonso XIII of Spain and President Wilson at the urging of Otto Kahn.

Nijinsky became increasingly mentally unstable with the stresses of having to manage tours himself and deprived of opportunities to dance, which had always been his total obsession. After a tour of South America in 1917, and due to travel difficulties imposed by the war, the family settled in Switzerland, where his mental condition continued to deteriorate. The rest of his life was spent suffering from mental illness which incapacitated him beyond the ability to dance again in public.