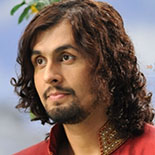 Sonu Nigam, born July 30, 1973, is an Indian singer whose songs have been featured mainly in Kannada and Hindi movies.

Nigam has also sung many songs in other languages including Oriya, Tamil, Assamese, Punjabi, Bengali, Malayalam, Marathi, Telugu and Nepali. He has released Indian pop albums and acted in a few movies.