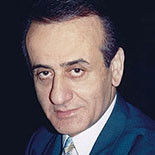 He is best known for being the first Greek artist to record or re-record the authentic, “prohibited” rebetika songs in the early 1970s with their original lyrics at a time when this type of music was censored in Greece due to the military junta of 1967–1974 in power.