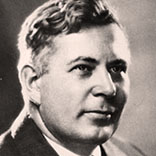 William Moulton Marston (May 9, 1893 – May 2, 1947), also known by the pen name Charles Moulton, was an American psychologist, inventor and comic book writer who created the character Wonder Woman.

Two women, his wife Elizabeth Holloway Marston and Olive Byrne (who lived with the couple in an extended relationship), served as exemplars for the character and greatly influenced her creation. He was inducted into the Comic Book Hall of Fame in 2006.

Marston is credited as the creator of the systolic blood pressure test, which became one component of the modern polygraph invented by John Augustus Larson in Berkeley, California. Marston’s wife Elizabeth Holloway Marston is said to have suggested a connection between emotion and blood pressure to William, observing that, “[w]hen she got mad or excited, her blood pressure seemed to climb” (Lamb, 2001). Although Elizabeth is not listed as Marston’s collaborator in his early work, Lamb, Matte (1996), and others refer directly and indirectly to Elizabeth’s own work on her husband’s research. She also appears in a picture taken in his laboratory in the 1920s (reproduced by Marston, 1938).Marston set out to commercialize Larson’s invention of the polygraph when he subsequently embarked on a career in entertainment and comic book writing, and appeared as a salesman in ads for Gillette Razors, using a polygraph motif. Some have linked the device to the Lasso of Truth associated with the comic book character Wonder Woman, but a direct connection is difficult to demonstrate.

From his psychological work, Marston apparently became convinced that women were more honest and reliable than men and could work faster and more accurately. During his lifetime, Marston championed the causes of the women of the day.

Marston was also a writer of essays in popular psychology. In 1928, he published Emotions of Normal People, which elaborated the DISC Theory. Marston viewed people behaving along two axes, with their attention being either passive or active; depending on the individual’s perception of his or her environment as either favorable or antagonistic. By placing the axes at right angles, four quadrants form with each describing a behavioral pattern:

Marston posited that there is a masculine notion of freedom that is inherently anarchic and violent and an opposing feminine notion based on “Love Allure” that leads to an ideal state of submission to loving authority. In 1929, Moulton wrote on the blossoming Men’s Rights Movement as a newspaper columnist.

On October 25, 1940, an interview was conducted by former student Olive Byrne (under the pseudonym ‘Olive Richard’) and published in The Family Circle, titled “Don’t Laugh at the Comics.” Marston described in the article that he saw in the “great educational potential” of comic books. A follow-up article was published two years later in 1942. This article caught the attention of comics publisher Max Gaines, who hired Marston as an Educational Consultant for National Periodicals and All-American Publications, two of the companies that would later merge to form DC Comics.

In the early 1940s, the DC Comics line was dominated by super-power endowed male characters such as the Green Lantern, Superman (its flagship character), as well as Batman who became known for his high tech gadgets. According to the Fall 2001 issue of the Boston University alumni magazine, it was Marston’s wife Elizabeth’s idea to create a female superhero. Marston was struck by an idea for a new kind of superhero; one who would triumph not with fists or firepower, but with love. “Fine,” said Elizabeth. “But make her a woman.” 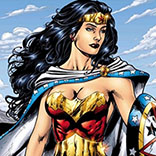 Marston introduced the idea to Max Gaines, co-founder with Jack Liebowitz of All-American Publications. Given the go-ahead, Marston developed Wonder Woman, basing her character on both Elizabeth and Olive Byrne[citation needed], to be the model of a conventional, liberated, powerful modern woman. Marston’s pseudonym, Charles Moulton, combined his own and Gaines’ middle names.

In a 1943 issue of “The American Scholar”, Marston wrote: “Not even girls want to be girls so long as our feminine archetype lacks force, strength, and power. Not wanting to be girls, they don’t want to be tender, submissive, peace-loving as good women are. Women’s strong qualities have become despised because of their weakness. The obvious remedy is to create a feminine character with all the strength of Superman plus all the allure of a good and beautiful woman.”