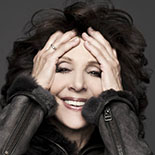 Andrea Louise Martin (born January 15, 1947) is an American actress and comedian. She has appeared in films such as Black Christmas, My Big Fat Greek Wedding, Hedwig and the Angry Inch, on stage in productions such as the 2013 revival of Pippin for which she won the Tony Award for Best Featured Actress in a Musical, My Favorite Year, Fiddler on the Roof and Candide, and in the television series SCTV.