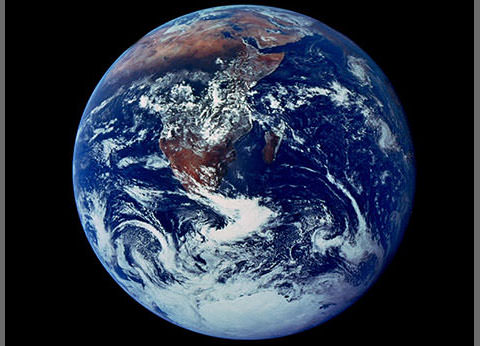 The name has also been applied by NASA to a 2012 series of image data sets covering the entire globe at relatively high resolution, created by carefully sifting through satellite-captured sequences taken over time, to eliminate as much cloud cover as possible from the collated set of images.

Because many societies typically orient maps and globes to place Antarctica at the bottom, NASA rotated the original picture 180 degrees before publishing it.

The snapshot—taken at 5:39 a.m. EST (10:39 UTC)—is one of the most widely distributed photographic images in existence. The image is one of the few to show a fully illuminated Earth, as the astronauts had the Sun behind them when they took the image. To the astronauts, Earth had the appearance and size of a glass marble, hence the name.

Apollo 17 was the last manned lunar mission. No one since has been far enough from Earth to photograph a whole-Earth image such as The Blue Marble, but whole-Earth images have been taken by many unmanned spacecraft missions.