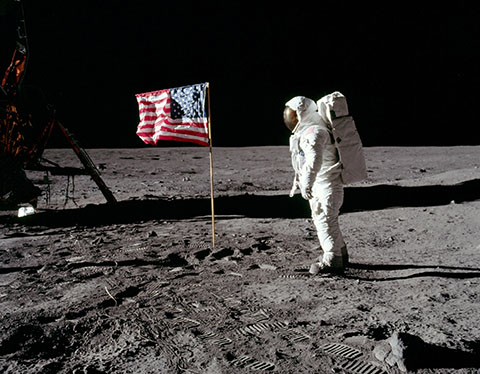 Apollo 11 was the spaceflight that landed the first humans on the Moon, Americans Neil Armstrong and Buzz Aldrin, on July 20, 1969, at 20:18 UTC. Armstrong became the first to step onto the lunar surface six hours later on July 21 at 02:56 UTC. Armstrong spent about two and a half hours outside the spacecraft, Aldrin slightly less, and together they collected 47.5 pounds (21.5 kg) of lunar material for return to Earth. A third member of the mission, Michael Collins, piloted the command spacecraft alone in lunar orbit until Armstrong and Aldrin returned to it just under a day later for the trip back to Earth. 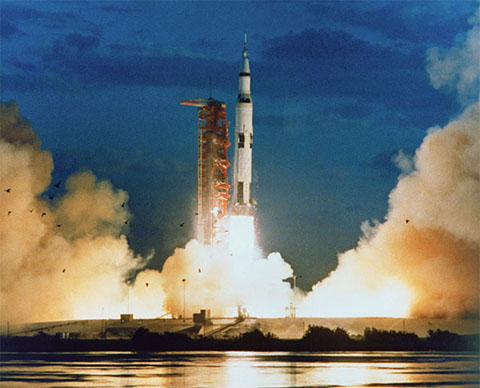 Launched by a Saturn V rocket from Kennedy Space Center in Merritt Island, Florida, on July 16, Apollo 11 was the fifth manned mission of NASA’s Apollo program. The Apollo spacecraft had three parts: a Command Module (CM) with a cabin for the three astronauts, and the only part that landed back on Earth; a Service Module (SM), which supported the Command Module with propulsion, electrical power, oxygen, and water; and a Lunar Module (LM) for landing on the Moon. After being sent toward the Moon by the Saturn V’s upper stage, the astronauts separated the spacecraft from it and traveled for three days until they entered into lunar orbit. Armstrong and Aldrin then moved into the Lunar Module and landed in the Sea of Tranquility. They stayed a total of about 21½ hours on the lunar surface. After lifting off in the upper part of the Lunar Module and rejoining Collins in the Command Module, they returned to Earth and landed in the Pacific Ocean on July 24. 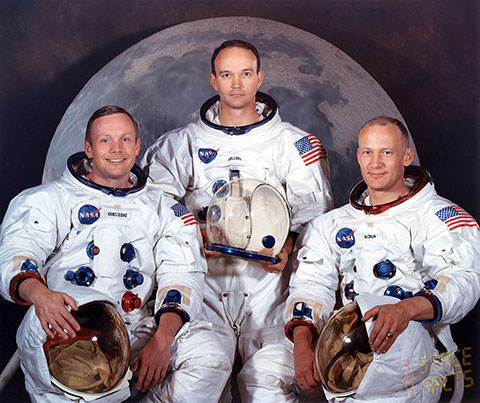 Broadcast on live TV to a world-wide audience, Armstrong stepped onto the lunar surface and described the event as “one small step for [a] man, one giant leap for mankind.” Apollo 11 effectively ended the Space Race and fulfilled a national goal proposed in 1961 by the late US President John F. Kennedy in a speech before the United States Congress, “before this decade is out, of landing a man on the Moon and returning him safely to the Earth.”