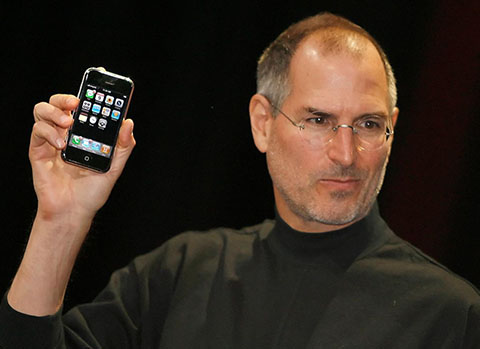 iPhone is a line of smartphones designed and marketed by Apple Inc. It runs Apple’s iOS mobile operating system. The first generation iPhone was released on June 29, 2007.

The user interface is built around the device’s multi-touch screen, including a virtual keyboard. The iPhone has Wi-Fi and can connect to many different cellular networks.

The resounding sales of the iPhone have been credited with reshaping the smartphone industry and helping make Apple one of the world’s most valuable publicly traded companies in 2011–12. The iPhone is the top-selling phone of any kind in some countries, including the United States and Japan. In the last quarter of 2013, there were 51 million iPhones sold, a new record, compared to 47.8 million in the last quarter of 2012.

Development of what was to become the iPhone began in 2004, when Apple started to gather a team of 1000 employees to work on the highly confidential “Project Purple”, including Jonathan Ive, the designer behind the iPhone. Apple CEO Steve Jobs steered the original focus away from a tablet, like the iPad, and towards a phone. Apple created the device during a secretive collaboration with AT&T Mobility—Cingular Wireless at the time—at an estimated development cost of US$150 million over thirty months.

Apple rejected the “design by committee” approach that had yielded the Motorola ROKR E1, a largely unsuccessful collaboration with Motorola. Instead, Cingular gave Apple the liberty to develop the iPhone’s hardware and software in-house and even paid Apple a fraction of its monthly service revenue (until the iPhone 3G), in exchange for four years of exclusive US sales, until 2011.

Jobs unveiled the iPhone to the public on January 9, 2007, at the Macworld 2007 convention at the Moscone Center in San Francisco. The two initial models, a 4 GB model priced at US$ 499 and an 8 GB model at US$ 599, went on sale in the United States on June 29, 2007, at 6:00 pm local time, while hundreds of customers lined up outside the stores nationwide. The passionate reaction to the launch of the iPhone resulted in sections of the media dubbing it the ‘Jesus phone’. Following this successful release in the US, the first generation iPhone was made available in the UK, France, and Germany in November 2007, and Ireland and Austria in the spring of 2008.

Apple sold 6.1 million first generation iPhone units over five quarters. Sales in Q4 2008 surpassed temporarily those of Research In Motion’s (RIM) BlackBerry sales of 5.2 million units, which made Apple briefly the third largest mobile phone manufacturer by revenue, after Nokia and Samsung (it must be noted that some of this income is deferred). Recorded sales grew steadily thereafter, and by the end of fiscal year 2010, a total of 73.5 million iPhones were sold.

By 2010, the iPhone had a market share of barely 4% of all cellphones, however Apple pulled in more than 50% of the total profit that global cellphone sales generate. Apple sold 14.1 million iPhones in Q3 2010, representing a 91% unit growth over the year-ago quarter, which was well ahead of IDC’s latest published estimate of 64% growth for the global smartphone market in the September quarter. Apple’s sales surpassed that of Research in Motion’s 12.1 million BlackBerry units sold in their most recent quarter ended August 2010. In the United States market alone for Q3 2010, while there were 9.1 million Android-powered smartphones shipped for 43.6% of the market, Apple iOS was the number two phone operating system with 26.2% but the 5.5 million iPhones sold made it the most popular single device.