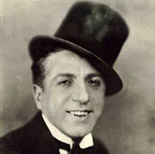 He fronted a band and touring stage show that presented a combination of jazz, comedy, and nostalgia that was a hit with the American public before and after World War II. He was known by the moniker “Mr. Entertainment” or Ted “Is Everybody Happy?”