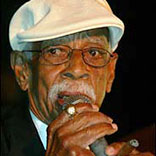 Leyva was part of the Buena Vista Social Club, and composed some of Cuba’s best known standards.

Leyva was born as Wilfredo Leiva Pascual in Morón, Cuba in 1917. He won a bongo contest at the age of six and made his singing debut in 1932. He recorded over 25 albums since he signed his first contract with RCA Victor in 1950. Leyva sang with other Cuban artists such as Benny Moré, Bebo Valdés and Noro Morales and was a member of Estrellas de Areito and “Compay Segundo y Sus Muchachos.”