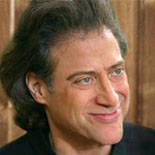 Lewis gained popularity in the 1980s with numerous appearances on Late Night with David Letterman and his own television specials on HBO. He starred with Jamie Lee Curtis in the ABC sitcom Anything But Love which ran for four seasons. He co-starred with Don Rickles on the short-lived Daddy Dearest. He had a recurring role on the Showtime series Rude Awakening, as Rabbi Richard Glass on the dramatic series 7th Heaven, and appeared on the Tales from the Crypt episode “Whirlpool”. Lewis has written comic articles for magazines such as Playboy, and endorsed the popular early-1990s beverage, Boku, as well as Snapple and Certs breath mints. In 2007 he made a cameo appearance as Phillip, the school counselor of Max’s school, in the T.V Series George Lopez. Recently he also made cameos in Everybody Hates Chris as an old man in the hospital bed next to Chris Rock and as Charlie Sheen’s accountant in Two and a Half Men.