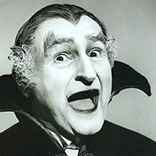 He is best known for his role as Count Dracula lookalike “Grandpa Munster” on the CBS television series The Munsters and its subsequent film versions. Later in life, he was also a restaurant owner, political candidate, and radio broadcaster.