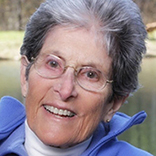 These legs, for instance, mine.
Your arms take you back in.

Spoons of our fingers, lips
admit their ownership.

and overhead, a plane
singsongs coming down.

Nothing is changed, except
there was a moment when

the wolf, the mongering wolf
who stands outside the self

lay lightly down, and slept.

‘Silly dunce!’ said the fly. ‘What bug ever flew?
Those are fireflies. And so are you.’

Back and forth through the dark each shouted his word
Till their quarrel awakened the early bird.

‘You three noisy things, you are all related,’
She said to the worm, and promptly ate it.

With a snap of her bill she finished the fly,
And the lightning bug was the last to die.

All glowers and glimmerers, there’s a MORAL:
Shine if you must, but do not quarrel.