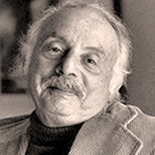 About his own work, Kunitz has said: “The poem comes in the form of a blessing—‘like rapture breaking on the mind,’ as I tried to phrase it in my youth. Through the years I have found this gift of poetry to be life-sustaining, life-enhancing, and absolutely unpredictable. Does one live, therefore, for the sake of poetry? No, the reverse is true: poetry is for the sake of the life.”

I’ve tried to seal it in,
that cross-grained knot
on the opposite wall,
scored in the lintel of my door,
but it keeps bleeding through
into the world we share.
Mornings when I wake,
curled in my web,
I hear it come
with a rush of resin
out of the trauma
of its lopping-off.
Obstinate bud,
sticky with life,
made for the rain again,
it racks itself with shoots
that crackle overhead,
dividing as they grow.
Let be! Let be!
I shake my wings
and fly into its boughs.

My mother never forgave my father
for killing himself,
especially at such an awkward time
and in a public park,
that spring
when I was waiting to be born.
She locked his name
in her deepest cabinet
and would not let him out,
though I could hear him thumping.
When I came down from the attic
with the pastel portrait in my hand
of a long-lipped stranger
with a brave moustache
and deep brown level eyes,
she ripped it into shreds
without a single word
and slapped me hard.
In my sixty-fourth year
I can feel my cheek
still burning.