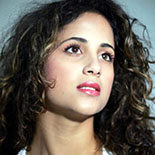 When Liel was 14 she performed the song “Imagine” on Shimon Peres’ 80th birthday and invited President Bill Clinton to sing along. The clip has been shown on TV shows all over the globe. After this performance, she started to receive invitations to perform from around the world.

In 2008 Liel performed at the 10th anniversary of the Peres “Center for Peace” an organization she supports. Liel performed throughout the whole evening but the most memorable moment was when she sang a duet with Andrea Bocelli. Together they performed a song called “Ray of Hope” which was written by the President of Israel Shimon Peres and was composed by Liel. They surprised the President and performed it there for the first time ever. Liel has performed with artists such as jazz musician Herbie Hancock, Andrea Bocelli, Patti LaBelle, guitarist Slash, and others. She also released her album titled: “Be Free” in Israel, Europe and Mexico which included collaborations with the artists above. In late 2008, Kolet enlisted in the Israeli Defence Forces. Where she performer for soldiers all over the country. Liel always says that the best weapon in the microphone. Liel also shared a stage with the Latin star Julio Iglesias; together they sang his famous hit called “All of You”. After her release from the Israeli army, Liel decided it was the right time to try the American market.

Liel has been filmed for a documentary on her life on the American channel PBS and received and toured all over the East Coast. She currently lives in Los Angeles and is recording an album with producer Humberto Gatica.