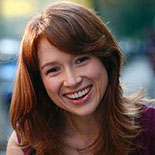 Elizabeth Claire “Ellie” Kemper (born May 2, 1980) is an American actress, comedian, and writer.

She is best known for her role as Erin Hannon in the NBC series The Office, as well as her supporting roles in the films Bridesmaids and 21 Jump Street. She currently plays the title role in the Netflix comedy series Unbreakable Kimmy Schmidt, for which she has received critical acclaim. In the summer of 2015, she joined NBC News as a temporary co-host on NBC’s morning news program, The Today Show.