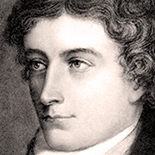 John Keats (October 31, 1795 – February 23, 1821) was an English Romantic poet. He was one of the main figures of the second generation of romantic poets along with Lord Byron and Percy Bysshe Shelley, despite his work only having been in publication for four years before his death.

Although his poems were not generally well-received by critics during his life, his reputation grew after his death, so that by the end of the 19th century he had become one of the most beloved of all English poets. He had a significant influence on a diverse range of poets and writers.

THE GRACES all answer

Bright star, would I were steadfast as thou art—
Not in lone splendor hung aloft the night
And watching, with eternal lids apart,
Like Nature’s patient, sleepless Eremite,
The moving waters at their priestlike task
Of pure ablution round earth’s human shores,
Or gazing on the new soft-fallen mask
Of snow upon the mountains and the moors—
No—yet still steadfast, still unchangeable,
Pillow’d upon my fair love’s ripening breast,
To feel for ever its soft fall and swell,
Awake for ever in a sweet unrest,
Still, still to hear tender-taken breath,
And so live ever—or else swoon to death.