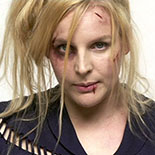 Judith is best recognized as the lead singer of Wir sind Helden, a German pop rock band that came to fame in Germany following the release of the song “Guten Tag” in 2002. The band received critical acclaim owing in part to Holofernes’ lyrics, which are characterized by their playful use of words and their often sociocritical nature.

After recording four albums that were chart successes in the German-speaking world, Wir sind Helden went on indefinite hiatus in 2012. Since then, Holofernes has recorded a solo album (Ein leichtes Schwert, 2014) and has also had a book of poems published (Du bellst vor dem falschen Baum, 2015).