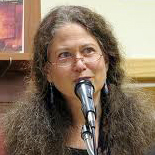 Jane Hirshfield, American poet, was born in New York City in on February 22, 1953.

She received her bachelor’s degree from Princeton University in the school’s first graduating class to include women. She later studied at the San Francisco Zen Center, including three years of monastic practice at Tassajara Zen Mountain Center.She received lay ordination in Soto Zen in 1979.

She is the author of Nine Gates: Entering the Mind of Poetry (1997) and has also edited and translated The Ink Dark Moon: Poems by Ono no Komachi and Izumi Shikibu, Women of the Ancient Court of Japan (1990) with Mariko Aratani and Women in Praise of the Sacred: Forty-Three Centuries of Spiritual Poetry by Women (1994).

Half-sleeping,
my body pulls toward yours—
desire a long oar dipping
again and again
in this night’s dark rain.

I want to gather your darkness
in my hands, to cup it like water
and drink.
I want this in the same way
as I want to touch your cheek—
it is the same—
the way a moth will come
to the bedroom window in late September,
beating its wings against cold glass;
the way a horse will lower
its long head to water, and drink,
and pause to lift its head and look,
and drink again,
taking everything in with the water,
everything.