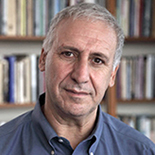 Edward Hirsch (born January 20, 1950) is an American poet and critic who wrote a national bestseller about reading poetry.

Hirsch has published eight books of poems, including The Living Fire: New and Selected Poems (2010), which brings together thirty-five years of work. He is president of the John Simon Guggenheim Memorial Foundation in New York City (not to be mistaken for E. D. Hirsch, Jr.).

IN SPITE OF EVERYTHING, THE STARS
Edward Hirsch

Like a stunned piano, like a bucket
of fresh milk flung into the air
or a dozen fists of confetti
thrown hard at a bride
stepping down from the altar,
the stars surprise the sky.
Think of dazed stones
floating overhead, or an ocean
of starfish hung up to dry. Yes,
like a conductor’s expectant arm
about to lift towards the chorus,
or a juggler’s plates defying gravity,
or a hundred fastballs fired at once
and freezing in midair, the stars
startle the sky over the city.

And that’s why drunks leaning up
against abandoned buildings, women
hurrying home on deserted side streets,
policemen turning blind corners, and
even thieves stepping from alleys
all stare up at once. Why else do
sleepwalkers move towards the windows,
or old men drag flimsy lawn chairs
onto fire escapes, or hardened criminals
press sad foreheads to steel bars?
Because the night is alive with lamps!
That’s why in dark houses all over the city
dreams stir in the pillows, a million
plumes of breath rise into the sky.

At midnight the soul dreams of a small fire
of stars flaming on the other side of the sky,
but the body stares into an empty night sheen,
a hollow-eyed darkness. Poor luckless angels,
feverish old loves: don’t separate yet.
Let what rises live with what descends.

My mother wouldn’t be cowed into nursing
and decided that formula was healthier
than the liquid from her breasts.

And so I never sucked a single drop
from the source, a river dried up.
It was always bottled for me.

turned to me with an enigmatic smile
and cupped my face in her chapped hands
and tipped her nipple into my mouth.

This happened a long time ago in another city
and it is wrong to tell about it.
It was infantile to bring it up in therapy.

And yet it is one of those moments—
misplaced, involuntary—that swim up
out of the past without a conscience:

She lifts my face and I taste it—
the sudden spurting nectar,
the incurable sweetness that is life.