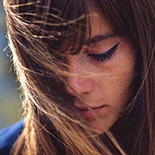 Françoise Madeleine Hardy (born January 17, 1944) is a French singer and actress. Hardy is a popular figure in music and fashion.

Hardy sings in French, English, Italian, Spanish and German, and has one interpretation in Portuguese. In 1963 she came fifth for Monaco in the Eurovision Song Contest with “L’amour s’en va”. In 1963, she was awarded the Grand Prix du Disque of the Académie Charles Cros. Hardy is mentioned in a poem by Bob Dylan, “Some other kinds of songs”, which he wrote on the cover of his album Another Side of Bob Dylan, released in 1964.