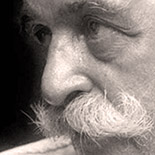 George Ivanovich Gurdjieff (January 13, 1866 – October 29, 1949), also commonly referred to as G. I. Gurdjieff, was an influential spiritual teacher of the early to mid-20th century.

Gurdjieff taught that most humans live their lives in a state of hypnotic “waking sleep”, but that it is possible to transcend to a higher state of consciousness and achieve full human potential. Gurdjieff developed a method for doing so, calling his discipline “The Work” (connoting “work on oneself”) or “the Method”. According to his principles and instructions, Gurdjieff’s method for awakening one’s consciousness is different from that of the fakir, monk or yogi, so his discipline is also called (originally) the “Fourth Way”. At one point, he described his teaching as being “esoteric Christianity”.

At different times in his life, Gurdjieff formed and closed various schools around the world to teach The Work. He claimed that the teachings he brought to the West from his own experiences and early travels expressed the truth found in ancient religions and wisdom teachings relating to self-awareness in people’s daily lives and humanity’s place in the universe. The title of his third series of writings, Life Is Real Only Then, When ‘I Am’, expresses the essence of his teachings. His complete series of books is entitled All and Everything.