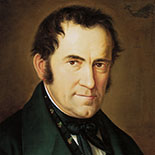 Franz Xaver Gruber (November 25, 1787 – June 7, 1863), was an Austrian primary school teacher and church organist in the village of Arnsdorf, who is best known for composing the music to Stille Nacht (Silent Night).

Together with Joseph Mohr, a Catholic priest who wrote the original German lyrics, Gruber composed the music for the Christmas carol Silent Night. On Christmas Eve of 1818, Mohr, an assistant pastor at St Nicholas, showed Gruber a six-stanza poem he had written in 1816. He asked Gruber to set the poem to music. The church organ had broken down so Gruber produced a melody with guitar arrangement for the poem. The two men sang Stille Nacht for the first time at Christmas Mass in St Nicholas Church while Mohr played guitar and the choir repeated the last two lines of each verse.

In later years, Gruber composed additional arrangements of the carol for organ and for organ with orchestra, as well as scores of other carols and masses, many of which are still in print and sung today in Austrian churches.