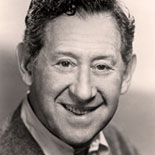 Gilford was born Jacob Aaron Gellman on the Lower East Side of Manhattan and grew up in Williamsburg, Brooklyn. His parents were Romanian-born Jewish immigrants Sophie “Susksa” (née Jackness), who owned a restaurant, and Aaron Gellman, a furrier. Gilford was the second of three sons, with an older brother Murray (“Moisha”) and a younger brother Nathaniel (“Natie”).

Gilford was discovered working in a pharmacy by his mentor Milton Berle. While working in amateur theater, he competed with other talented youngsters, including a young Jackie Gleason. He started doing imitations and impersonations. His first appearance on film was a short entitled Midnight Melodies where he did his imitations of George Jessel, Rudy Vallee and Harry Langdon. He developed some unique impressions that became his trademarks — most notably, one of “split pea soup coming to a furious boil” using only his face. Other unusual impressions he created were a fluorescent light going on in a dark room, John D. Rockefeller Sr. imitating Jimmy Durante, and impressions of animals.

In 1938, Gilford worked as the master of ceremonies in the first downtown New York integrated nightclub, “Cafe Society” owned and operated by Barney Josephson. He was a unique blend of the earlier style of the Yiddish theater, vaudeville and burlesque, and started the tradition of monology such as later comedians Lenny Bruce and Woody Allen used. He won numerous industry awards.

He was nominated for several Tony Awards for best supporting actor as Hysterium in A Funny Thing Happened on the Way to the Forum (1963), and for his role as Herr Schultz in Cabaret (1966). He was nominated for an Academy Award for best supporting actor in (1973) for his role as Phil Green in Save the Tiger (his co-star Jack Lemmon won for Best Actor). Sir Rudolf Bing engaged Gilford for the comic speaking role of the tippling jailer Frosch in the operetta Die Fledermaus. Loved in the part, Gilford performed it 77 times between 1950 and 1964.

One of Gilford’s specialties was pantomime, and this talent was put to good use by director George Abbott when he cast Gilford as the silent King Sextimus in Once upon a Mattress (Off-Broadway, 1959). Gilford shared the stage with a young Carol Burnett in this production, and reprised his performance with her in two separate televised versions of the show, in 1964 and in 1972.

Gilford’s career was derailed for a time during the 1950s and McCarthyism. He was an activist who campaigned for social change, integration and labor unions. He was quite active both socially and politically in left wing causes, as was his wife, Madeline Lee. The couple were implicated for their alleged Communist sympathies by the House Un-American Activities Committee (HUAC). Gilford and Madeline were specifically named by choreographer Jerome Robbins in his testimony to the HUAC.

Gilford and his wife were called to testify before the House Un-American Activities Committee in 1953. The couple had difficulty finding work during much of the rest of the 1950s due to the Hollywood blacklist. The couple often had to borrow money from friends to make ends meet. He found work towards the end of the 1950s and during the early 1960s with the end of the McCarthy era. He made his comeback as Hysterium in the 1962 Broadway musical A Funny Thing Happened on the Way to the Forum. He co-starred in the play with his close friend, Zero Mostel, who was also blacklisted during the McCarthy era. Ironically, this particular production was also choreographed by Jerome Robbins, who had previously testified before HUAC in 1953.

Gilford became successful mostly through roles on the Broadway stage, such as Drink To Me Only, Romanoff and Juliet, and The Diary of Anne Frank. He later enjoyed success in film and television, as well as a series of nationwide television commercials for Cracker Jack.