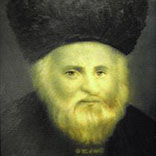 Elijah ben Shlomo Zalman Kremer, known as the Vilna Gaonor Elijah of Vilna, or by his Hebrew acronym Gra (“Gaon Rabbenu Eliyahu”) or Elijah Ben Solomon, (April 23, 1720 – October 9, 1797), was a Talmudist, halachist, kabbalist, and the foremost leader of non-hasidic Jewry of the past few centuries. He is commonly referred to in Hebrew as “the saintly genius from Vilnius.”

By the time he was twenty years old, rabbis were submitting their most difficult halakhic problems to him for legal rulings. He was a prolific author, writing such works as glosses on the Babylonian Talmud and Shulchan Aruch known as “Elaboration by the Gra”, a running commentary on the Mishnah (“The Years of Elijah”), and insights on the Pentateuch entitled “The Splendor of Elijah”. Various Kabbalistic works have commentaries in his name, and commentaries on the Proverbs and other books of the Tanakh were written later on in his life. None of his manuscripts were published in his lifetime, and he was perhaps too humble or shy to give them to anyone other than his family.

An example of the Gaon’s genius can be seen in his commentary on Genesis in his text “Aderes Eliahu”, published by his son. The medieval Spanish Jewish community leader Ramban asks “Is light the absence of darkness as Thomas Aquinas and others derived from the Prophets?”. The commentary in Aderes Eliahu is on verse 1:4 of Genesis.

And God divided the light from the darkness “I must infer from the verse that darkness is a separate creation from light and unrelated, rather than the physical absence of light”… “is different from ‘the darkness’ mentioned in the first verse.”