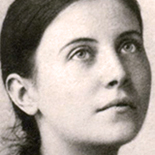 Galgani has been called the “Daughter of Passion” because of her profound imitation of the Passion of Christ.

Gemma was allowed at age nine to receive her first communion. Later she was not accepted by the Passionists to become a nun because of her poor health and her visions. At age 20, Gemma developed spinal meningitis, but was healed, attributing her extraordinary cure to the Sacred Heart of Jesus through the intercession of Venerable Gabriel of Our Lady of Sorrows (later canonized a saint), and Saint Marguerite Marie Alacoque.

Gemma was orphaned shortly after she turned 18, making her responsible for the upbringing of her younger siblings, which she did with her aunt Carolina. She declined two marriage proposals and became a housekeeper with the Giannini family.

According to a biography written by her spiritual director, the Reverend Germanus Ruoppolo, CP (now a venerable), Gemma began to display signs of the stigmata on June 8, 1899, at the age of twenty-one. She stated that she had spoken with her guardian angel, Jesus, the Virgin Mary, and other saints—especially Gabriel of Our Lady of Sorrows. According to her testimonies, she sometimes received special messages from them about current or future events. With her health in decline, Ruoppolo directed her to pray for the disappearance of her stigmata; she did so and the marks ceased. She said that she resisted the Devil’s attacks often.

Gemma was frequently found in a state of ecstasy. She has also been reputed to levitate. In one instance, in the dining room of her home was a large crucifix that was highly venerated by the whole family, particularly by Gemma. She claimed that at least once that she found herself raised from the floor with her arms around the crucifix while kissing the wound on the side of the crucified.

Saint Gemma was one of the recipients of the Holy Wounds of Christ. She tells what took place when she received the Holy Stigmata on June 8 in the year 1899, a Thursday, on the eve of the feast of the Sacred Heart. The Saint discloses: 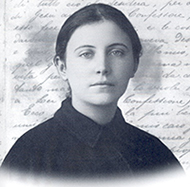 I felt an inward sorrow for my sins, but so intense that I have never felt the like again … My will made me detest them all, and promise willingly to suffer everything as expiation for them. Then the thoughts crowded thickly within me, and they were thoughts of sorrow, love, fear, hope and comfort.

Saint Gemma then experienced a rapture in which she saw her guardian angel in the company of the Blessed Virgin Mary. Saint Gemma tells what took place next:

The Blessed Virgin Mary opened her mantle and covered me with it. At that very moment Jesus appeared with his wounds all open; blood was not flowing from them, but flames of fire which in one moment came and touched my hands, feet and heart. I felt I was dying, and should have fallen down but for my Mother (Blessed Virgin Mary) who supported me and kept me under her mantle. Thus I remained for several hours. Then my Mother kissed my forehead, the vision disappeared and I found myself on my knees; but I still had a keen pain in my hands, feet and heart. I got up to get into bed and saw that blood was coming from the places where I had the pain. I covered them as well as I could and then, helped by my guardian angel, got into bed.

She was beatified within 30 years from the date of her death which included the mandatory five years waiting period before the process of canonization starts. Very few in the Catholic Church have had sainthood conferred on them this quickly.

As one of the most popular saints of the Passionist Order, the devotion to Gemma Galgani is particularly strong both in Italy and Latin America. She is a patron saint of students (said to be the top of her class before having to leave school) and of pharmacists.