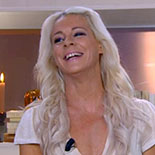 Outside the world of opera and operettas, she has also performed chansons, cabaret, jazz, and appeared in musicals, and she has declared that she is very much attracted to the attributes of varité theatre and small, intimate stage rooms. She is a member of The Royal Swedish Academy of Music. Ernman represented Sweden at the Eurovision Song Contest 2009 in Moscow, Russia.