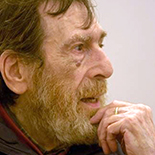 Russell Edson (April 29, 1935 – April 29, 2014) was an American poet, novelist, writer and illustrator, and the son of the cartoonist-screenwriter Gus Edson.

He studied art early in life and attended the Art Students League as a teenager. He began publishing poetry in the 1960s. His honors as a poet include a Guggenheim fellowship and several fellowships from the National Endowment for the Arts.Called the “godfather of the prose poem in America,” Russell Edson’s idiosyncratic body of work is populated with strange and intriguing figures: a woman fights a tree, a mother serves ape; in the poem “Let Us Consider,” there’s a “farmer who makes his straw hat his sweetheart” and an “old woman who makes a floor lamp her son.” The poems are surreal and fablelike, sometimes resembling brief plays. Donald Hall has said of Edson’s poetry, “It’s fanciful, it’s even funny—but his humor carries discomfort with it, like all serious humor.” Peter Schejeldahl has pointed out that his poems have “the sustained wackiness of old Warner Brothers cartoons.”

In the 1960s he began publishing poetry; since then, he has received fellowships from the Guggenheim Foundation and the National Endowment for the Arts.

He is convincing her. It is all so private.

And it is such a private thing the thing they do.

He is forming her into the wallpaper. He is smoothing her down into the flowers there. He is finding  her nipples there.

And he is kissing her pubis there.   He climbs into the wallpaper among the flowers. And his buttocks move in and out of the wall.

A father with a huge eraser erases his daughter. When he
finishes there’s only a red smudge on the wall.
His wife says, where is Amyloo?
She’s a mistake, I erased her.
What about all her lovely things? asks his wife.
I’ll erase them too.
All her pretty clothes? . . .
I’ll erase her closet, her dresser–shut up about Amyloo!
Bring your head over here and I’ll erase Amyloo out of it.
The husband rubs his eraser on his wife’s forehead, and as
she begins to forget she says, hummm, I wonder whatever
happened to Amyloo? . . .
Never heard of her, says her husband.
And you, she says, who are you? You’re not Amyloo, are
you? I don’t remember your being Amyloo. Are you my
Amyloo, whom I don’t remember anymore? . . .
Of course not, Amyloo was a girl. Do I look like a girl?
. . . I don’t know, I don’t know what anything looks like
anymore. . .