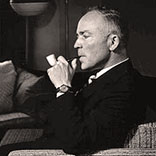 THE HARD STRUCTURE OF THE WORLD
Richard Eberhart

Is made up of reservoirs,
Birds flying South, mailmen

With a haymaker or a sleigh,
Hope always belaboring despair.

Form is a jostle, a throstle,
Life a slice of sleight,

Indians are looking out from the
Cheekbones of Connecticut Yankees,

Poltergeists deploy northward
To tinderboxes in cupboards in Maine,

The last chock knocked, the vessel
Would not go down the Damariscotta

Until the sick captain’s four-poster,
Moved to the window by four oldsters

Gave him a sight of her, and
He gave her a beautiful sign,

Who, having lost the plow-bolt
Right at their feet, found it

Concealed in her apron: she laughed,
And made the earth fecund again.

From seeing too much of the world
We do not understand it.

There is something unknown in knowing.
Unfaith is what keeps faith going.

You would think the fury of aerial bombardment
Would rouse God to relent; the infinite spaces
Are still silent. He looks on shock-pried faces.
History, even, does not know what is meant.

You would feel that after so many centuries
God would give man to repent; yet he can kill
As Cain could, but with multitudinous will,
No farther advanced than in his ancient furies.

Was man made stupid to see his own stupidity?
Is God by definition indifferent, beyond us all?
Is the eternal truth man’s fighting soul
Wherein the Beast ravens in its own avidity?

Of Van Wettering I speak, and Averill,
Names on a list, whose faces I do not recall
But they are gone to early death, who late in school
Distinguished the belt feed lever from the belt holding pawl.