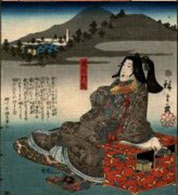 From 1174 to 1178, Kenreimon’in Ukyo no Daibu, a member of the Fujiwara family, was an attendant to Empress Tokudu, consort of Emperor Takakura.

In 1180, the emperor abdicated, and the empress took Buddhist vows as Kenreimon’in (hence the first part of Daibu’s name; “Ukyo no Daibu” refers to a position held by her father or sponsor).

Daibu left the court in 1178, but she continued to exchange poems with those she had known there, and she continued to see her lover, Taira no Sukemori, a leading member of the Taira family. The Taira had taken the place that the Fujiwara had held earlier, controlling the emperor and the court, and so holding ultimate power. Sukemori’s grandfather was the most important person in Kyoto; because of his position, Sukemori had to marry as his family wished, and his affair with Daibu was conducted clandestinely.

You, orange tree—
please answer me this question:
the Fifth Month has passed,
but might you still have the scent
of the sleeves he wore long ago?