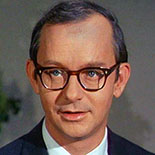 He appeared in the U.S. television series Mr. Peepers (1952–1955), plus several other popular shows, and as a character actor in over 20 films. Cox was the voice of the popular animated canine superhero Underdog. Although often cast as a meek milquetoast, he was actually quite athletic as well as a military veteran. He married three times and was a close friend of Marlon Brando.