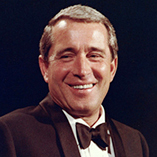 During a career spanning more than half a century, he recorded exclusively for the RCA Victor label after signing with them in 1943. “Mr. C.”, as he was nicknamed, sold millions of records for Radio Corporation of America (RCA) and pioneered a weekly musical variety television show, which set the standards for the genre and proved to be one of the most successful in television history. Como was seen weekly on television from 1949 to 1963, then continued hosting the Kraft Music Hall variety program on a monthly basis until 1967. His television shows and seasonal specials were broadcast throughout the world. Also a popular recording artist, Perry Como produced numerous hit records with record sales so high the label literally stopped counting at Como’s behest. His combined success on television and popular recordings was not matched by any other artist of the time.Como’s appeal spanned generations and he was widely respected for both his professional standards and the conduct in his personal life. In the official RCA Records Billboard magazine memorial, his life was summed up in these few words: “50 years of music and a life well lived. An example to all.” Composer Ervin Drake said of him, “… Occasionally someone like Perry comes along and won’t ‘go with the flow’ and still prevails in spite of all the bankrupt others who surround him and importune him to yield to their values.

Como received the 1959 Grammy Award for Best Vocal Performance, Male; five Emmys from 1955 to 1959; a Christopher Award (1956) and shared a Peabody Award with good friend Jackie Gleason in 1956. He was inducted into the Academy of Television Arts & Sciences Hall of Fame in 1990 and received a Kennedy Center Honor in 1987. Posthumously, Como received the Grammy Lifetime Achievement Award in 2002; he was inducted into the Long Island Music Hall of Fame in 2006.Como has the distinction of having three stars on the Hollywood Walk of Fame for his work in radio, television, and music.

AND I LOVE YOU SO
Lyrics by Perry Como

And yes I know, how lonely life can be
The shadows follow me
And the night won’t set me free
But I don’t let the evening get me down
Now that you’re around me

And yes I know, how lonely life can be
The shadows follow me
And the night won’t set me free
But I don’t let the evening get me down
Now that you’re around me