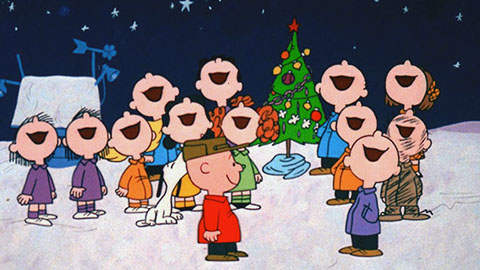 A Charlie Brown Christmas is an animated television special based on the comic strip Peanuts, by Charles M. Schulz. Produced by Lee Mendelson and directed by Bill Melendez, the program made its debut on CBS on December 9, 1965. In the special, lead character Charlie Brown finds himself depressed despite the onset of the cheerful holiday season. Lucy suggests he direct a school Christmas play, but he is both ignored and mocked by his peers. The story touches on the over-commercialization and secularism of Christmas, and serves to remind viewers of the true meaning of Christmas (the birth of Jesus Christ).

Peanuts had become a phenomenon worldwide by the mid-1960s, and the special was commissioned and sponsored by The Coca-Cola Company. It was written over a period of several weeks, and animated on a shoestring budget in only six months. In casting the characters, the producers went an unconventional route, hiring child actors. The program’s soundtrack was similarly unorthodox: it features a jazz score by pianist Vince Guaraldi. Its absence of a laugh track (a staple in television animation in this period), in addition to its tone, pacing, music, and animation, led both the producers and network to wrongly predict the project would be a disaster preceding its broadcast.