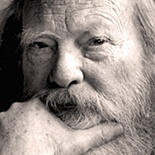 Carruth wrote more than 30 books of poetry, four books of literary criticism, essays, a novel and two poetry anthologies. He served as editor of Poetry magazine, as poetry editor of Harper’s, and as advisory editor of The Hudson Review 20 years. He was awarded a Bollingen Prize and Guggenheim and the NEA fellowships.

Noted for the breadth of his linguistic and formal resources, influenced by jazz and the blues, Carruth’s poems are informed by his political radicalism and sense of cultural responsibility.

THE COWS AT NIGHT
Hayden Carruth

The moon was like a full cup tonight,
too heavy, and sank in the mist
soon after dark, leaving for light

faint stars and the silver leaves
of milkweed beside the road,
gleaming before my car.

Yet I like driving at night
in summer and in Vermont:
the brown road through the mist

of mountain-dark, among farms
so quiet, and the roadside willows
opening out where I saw

the cows. Always a shock
to remember them there, those
great breathings close in the dark.

I stopped, and took my flashlight
to the pasture fence. They turned
to me where they lay, sad

and beautiful faces in the dark,
and I counted them—forty
near and far in the pasture,

turning to me, sad and beautiful
like girls very long ago
who were innocent, and sad

But I did not want to go,
not yet, nor knew what to do
if I should stay, for how

in that great darkness could I explain
anything, anything at all.
I stood by the fence. And then

very gently it began to rain.

Remember when you put on that wig
From the grab bag and then looked at yourself
In the mirror and laughed, and we laughed together?
It was a transformation, glamorous flowing tresses.
Who knows if you might not have liked to wear
That wig permanently, but of course you
Wouldn’t. Remember when you told me how
You meditated, looking at a stone until
You knew the soul of the stone? Inwardly I
Scoffed, being the backwoods pragmatic Yankee
That I was, yet I knew what you meant. I
Called it love. No magic was needed. And we
Loved each other too, not in the way of
Romance but in the way of two poets loving
A stone, and the world that the stone signified.
Remember when we had that argument over
Pee and piss in your poem about the bear?
“Bears don’t pee, they piss,” I said. But you were
Adamant. “My bears pee.” And that was that.
Then you moved away, across the continent,
And sometimes for a year I didn’t see you.
We phoned and wrote, we kept in touch. And then
You moved again, much farther away, I don’t
Know where. No word from you now at all. But
I am faithful, my dear Denise. And I still
Love the stone, and, yes, I know its soul.