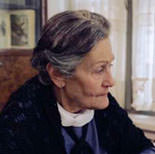 Anna Hedvig Büll (born Anna Hedwig Bühl, (February 4, 1887 – October 3, 1981) was an Estonian missionary of Baltic German extraction who helped to save the lives of several thousand Armenian orphans during the Armenian Genocide.

Hedvig Büll was born into a Lutheran family in 1887 in Haapsalu, Estonia, where her father owned a mud cure resort. She was the sixth of eight brothers and sisters. Büll attended a government school in Estonia until she was 15. Then she was sent for continued studies to Saint Petersburg where she attended for three years a protestant German school. While visiting her family in Haapsalu in 1903 she was inspired by a lecture given by a well-known evangelist Johann Kargel in her father’s house and decided to dedicate her life to humanitarian mission work.

After receiving her baccalaureate in 1903, Büll spent some time at the Mission House Malche in Bad Freienwalde (Oder) where she learned about the fate of Armenians in the Ottoman Empire. Motivated by her desire to work among the Armenian people she continued her studies at an evangelical school. Soon she was invited to work at an Armenian mission station in Maraş, however, due to her youth she was first sent to work with women and children in German villages and then for a few months with the poor in Saint Petersburg.

In 1909, Büll again attempted to go to work with Armenians, however, this time her trip was put on hold by the Adana massacre in Cilicia. Instead, Büll attended for two years a seminary for missionary teachers. After finishing her studies, Büll was finally able to proceed for Cilicia where she worked as a teacher at an Armenian orphanage in Maraş between 1911 and 1916. In 1915, Büll witnessed the Armenian Genocide in Cilicia and was instrumental in saving the lives of about two thousand Armenian children and women when Maraş was turned into “The City of Orphans”. Büll was recalled from Maraş in 1916.

In 1921, Büll was sent by the newly founded Action Chrétienne en Orient to Aleppo, Syria, where she established a refugee camp for the survivors of the Armenian Genocide. She also organized medical help for plague victims and the construction of two hospitals. Büll organized the establishment of weaving shops, gardens, an Armenian language school, and other enterprises to better the lives of the refugees.

In 1951, when most of the refugees under her care repatriated to Armenian SSR, Hedvig Büll was refused a visa by the Soviet authorities. She then returned to Europe in 1951. She died at a nursing home for missionaries on October 3, 1981, near Heidelberg, Germany, after having spent more than 40 years of her life for the betterment of lives of Armenian refugees. On April 29 1989, a memorial tablet was dedicated for her by the Armenian-Estonian Cultural Society on her birth house in Haapsalu, Kooli Street 5. Her memory is also preserved by a monument in Armenia and at the Armenian Genocide Museum in Yerevan. Among the refugees she helped to save and in Armenia she is sometimes referred to as the Mother of Armenians.