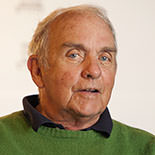 Carl Frederick Buechner (born July 11, 1926) is an American writer and theologian. He is an ordained Presbyterian minister and the author of more than thirty published books.

His work encompasses different genres, including fiction, autobiography, essays and sermons, and his career has spanned six decades. Buechner’s books have been translated into many languages for publication around the world. He is best known for his works A Long Day’s Dying (his first work, published in 1950); The Book of Bebb, a tetralogy based on the character Leo Bebb published in 1979; Godric, a first person narrative of the life of the medieval saint, and a finalist for the Pulitzer Prize in 1981; Brendan, a second novel narrating a saint’s life, published in 1987; Listening to Your Life: Daily Meditations with Frederick Buechner (1992); and his autobiographical works The Sacred Journey (1982), Now and Then (1983), Telling Secrets (1991), and The Eyes of the Heart: Memoirs of the Lost and Found (1999). He has been called “Major talent” and “…a very good writer indeed” by the New York Times, and “one of our most original storytellers” by USA Today. Annie Dillard (Pulitzer Prize-winning author of Pilgrim at Tinker Creek) says: “Frederick Buechner is one of our finest writers.”

Buechner’s work has often been praised for its ability to inspire readers to see the grace in their daily lives. As stated in the London Free Press, “He is one of our great novelists because he is one of our finest religious writers.” He has been a finalist for the National Book Award Presented by the National Book Foundation and the Pulitzer Prize, and has been awarded eight honorary degrees from such institutions as Yale University and the Virginia Theological Seminary. In addition, Buechner has been the recipient of the O. Henry Award, the Rosenthal Award, the Christianity and Literature Belles Lettres Prize, and has been recognized by the American Academy and Institute of Arts and Letters. He is continually listed among the most read authors by Christian audiences.