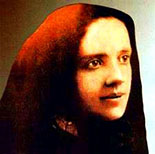 Saint Frances Xavier Cabrini, (July 15, 1850 – December 22, 1917), also called Mother Cabrini, was an Italian religious sister, who founded the Missionary Sisters of the Sacred Heart, a Catholic religious institute that was a major support to the Italian immigrants to the United States.

She was the first naturalized citizen of the United States to be canonized by the Roman Catholic Church.