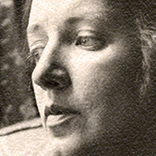 As poetry editor of The New Yorker magazine for nearly 40 years, Bogan played a major role in shaping mainstream poetic sensibilities of the mid-20th Century.

The Poetry Foundation notes that Bogan has been called by some critics the most accomplished woman poet of the twentieth century. It further notes that, “Some critics have placed her in a category of brilliant minor poets described as the “reactionary generation.” This group eschewed the prevailing Modernist forms that would come to dominate the literary landscape of the era in favor of more traditional techniques.

Her poems were published in the New Republic, the Nation, Poetry: A Magazine of Verse, Scribner’s and Atlantic Monthly. For thirty-eight years, she reviewed poetry for The New Yorker.

Bogan found the confessional poetry of Robert Lowell and John Berryman distasteful and self-indulgent. With the poets whose work she admired, however, such as Theodore Roethke, she was extremely supportive and encouraging. She was reclusive and disliked talking about herself, and for that reason details are scarce regarding her private life.

Bogan’s ability is unique in its strict adherence to lyrical forms, while maintaining a high emotional pitch: she was preoccupied with exploring the perpetual disparity of heart and mind. The majority of her poetry was written in the earlier half of her life when she published Body of This Death (1923) and Dark Summer (1929) and The Sleeping Fury (1937). She subsequently published volumes of her collected verse, and The Blue Estuaries: Poems 1923-1968, an overview of her life’s work in poetry. She died in New York City in 1970.

O God, in the dream the terrible horse began
To paw at the air, and make for me with his blows,
Fear kept for thirty-five years poured through his mane,
And retribution equally old, or nearly, breathed through his nose.

Coward complete, I lay and wept on the ground
When some strong creature appeared, and leapt for the rein.
Another woman, as I lay half in a swound
Leapt in the air, and clutched at the leather and chain.

But, like a lion in a legend, when I flung the glove
Pulled from my sweating, my cold right hand;
The terrible beast, that no one may understand,
Came to my side, and put down his head in love.

Now that I have your face by heart, I look
Less at its features than its darkening frame
Where quince and melon, yellow as young flame,
Lie with quilled dahlias and the shepherd’s crook.
Beyond, a garden, There, in insolent ease
The lead and marble figures watch the show
Of yet another summer loath to go
Although the scythes hang in the apple trees.

Now that I have your face by heart, I look.

Now that I have your voice by heart, I read
In the black chords upon a dulling page
Music that is not meant for music’s cage,
Whose emblems mix with words that shake and bleed.
The staves are shuttled over with a stark
Unprinted silence. In a double dream
I must spell out the storm, the running stream.
The beat’s too swift. The notes shift in the dark.

Now that I have your voice by heart, I read.

Now that I have your heart by heart, I see
The wharves with their great ships and architraves;
The rigging and the cargo and the slaves
On a strange beach under a broken sky.
O not departure, but a voyage done!
The bales stand on the stone; the anchor weeps
Its red rust downward, and the long vine creeps
Beside the salt herb, in the lengthening sun.

Now that I have your heart by heart, I see.