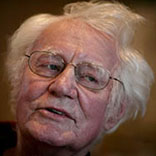 His most commercially successful book to date was Iron John: A Book About Men (1990), a key text of the mythopoetic men’s movement, which spent 62 weeks on the The New York Times Best Seller list. He won the 1968 National Book Award for Poetry for his book The Light Around the Body.

Think in ways you’ve never thought before
If the phone rings, think of it as carrying a message
Larger than anything you’ve ever heard,
Vaster than a hundred lines of Yeats.

Think that someone may bring a bear to your door,
Maybe wounded and deranged; or think that a moose
Has risen out of the lake, and he’s carrying on his antlers
A child of your own whom you’ve never seen.

When someone knocks on the door, think that he’s about
To give you something large: tell you you’re forgiven,
Or that it’s not necessary to work all the time, or that it’s
Been decided that if you lie down no one will die.

A man and a woman sit near each other, and they do not long
at this moment to be older, or younger, nor born
in any other nation, or time, or place.
They are content to be where they are, talking or not talking.
Their breaths together feed someone whom we do not know.
The man sees the way his fingers move;
he sees her hands close around a book she hands to him.
They obey a third body they have in common.
They have made a promise to love that body.
Age may come, parting may come, death will come.
A man and woman sit near each other;
as they breathe they feed someone we do not know,
someone we know of, whom we have never seen.