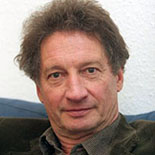 Blumenthal began his career as a lawyer. He earned his JD from Cornell Law School, and later went on to study clinical psychology at Antioch.

Blumenthal once commented: “Like many poets, I came to my vocation, one might say, ‘through the back door,’ having struggled through years of seemingly desirable yet (to me) unsatisfying jobs, while ‘stealing’ the time for my true work. The original impetus for my writing, perhaps, was best reflected in a statement made by Robert Mezey—‘I am a man, a Piscean, and unhappy, and therefore I make up poems’—but I feel, now, that my work derives from the healthier (and happier) desire to tap the sources of my own inner wisdom, and to make music of it.”

WHAT I BELIEVE
Michael Blumenthal

I believe there is no justice,
but that cottongrass and bunchberry
grow on the mountain.

I believe that a scorpion’s sting
will kill a man,  but that his wife will remarry.
I believe that, the older we get,

the weaker the body,
but the stronger the soul.
I believe that if you roll over at night

in an empty bed,  the air consoles you.
I believe that no one is spared  the darkness,
and no one gets all of it.

I believe we all drown eventually  in a sea of our making,
but that the land belongs to someone else.
I believe in destiny.

And I believe in free will.
I believe that, when all
the clocks break,

time goes on without them.
And I believe that whatever  pulls us under,
will do so gently.