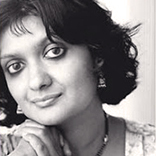 Sujata Bhatt (born May 6, 1956) is an Indian poet, a native speaker of Gujarati.

Sujata Bhatt was born in Ahmedabad, and brought up in Pune, India until 1968, when she emigrated to the United States with her family.

She received the Commonwealth Poetry Prize (Asia) and the Alice Hunt Bartlett Award for her first collection Brunizem. She received a Cholmondeley Award in 1991 and the Italian Tratti Poetry Prize in 2000. Her translations from the German include Mickle Makes Muckle: poems, mini plays and short prose by Michael Augustin (Dedalus Press, 2007). Bhatt was a visiting fellow at Dickinson College, Pennsylvania and currently works as a freelance writer.

She has translated Gujarati poetry into English for the Penguin Anthology of Contemporary Indian Women Poets. Combining both Gujarati and English, Bhatt writes “Indian-English rather than Anglo-Indian poetry.”Her poems have appeared in various journals in the United Kingdom, Ireland, the United States, and Canada, and have been widely anthologized, as well as being broadcast on British, German, and Dutch radio.

Many of Bhatt’s poems have themes of love and violence. She explores issues such as racism and the interaction between Asian, European, and North American culture.

You laugh,
but I want to know
how would we break the long silence
if we had the same rules?

It’s not enough to say
she kissed his balls,
licked his cock long
how her tongue could not stop.

For he thinks of the first day:
she turns her head away
as she takes off her T-shirt
blue jeans, underwear, bra.
She doesn’t even look at him
until she’s in the lake,
the clear water up to her neck
yet unable to hide her skin.

They swim out
to the islands
but he doesn’t remember swimming;
just brushing against her leg
once, then diving down
beneath her thighs    staying underwater
long enough for a good look,
coming up for air    and watching
her black hair streaming back straight,
then watching her
step over
the stones, out of the water.

She doesn’t know what to say.
He wishes they were swans,
Yeats’s swans
would not need to speak
but could always glide across
other worlds;
magical, yet rustling with real reeds.

The sun in her yes
so they move closer to the pine trees.
When he touches her nipples
he doesn’t know
who is more surprised
(years later he remembers that look,
the way her eyes open wider).
He’s surprised
she wants him
to kiss her nipples again and again
because she’s only 17 he’s surprised
her breasts are so full.
She’s surprised
it feels so good
because he’s only 17 she’s surprised
he can be so gentle
yet so hard inside her,
the way pine needles
can soften the ground.
Where does the ground end
and she begin?
She must have swallowed the sky
the lake, and all the woods
veined with amber brown pathways;

for now great white wings
are swooping through
her thighs, beating stronger
up her chest,
the beak stroking her spine
feathers tingling her skin,
the blood inside
her groins swells

while wings are rushing to get out,
rushing.

NOTHING IS BLACK, REALLY NOTHING
Sujata Bhatt

But Frida, how black you could paint
your pulled-back hair, your braids,
and the little dark hairs above your lips—
How black your eyes
your eyebrows;
how black the hairs of your monkey
expecially in Fulang-Chang and I.

But nothing is black.
True black that breathes
must shine with blue,
green shadows—some say
a reddish glow means
the color isn’t black enough.

2
Then there was elephantinum,
elephant-tusk-black.
For Plinius records the tale
of Appelles, born
around 350 BC, he was
Alexander the Great’s blue-blooded court painter—
he was the firsr
to create the color called elephantinum
from fired ivory.

Dry distilled from tusks,
the fat fired out
from the elephant tusks…
and in the end black powder exrtracted,
distilled,
dry, dry…

And you can extract black
out of grape seeds.

And you can extract black
out of wood or gas
or out of that oil hidden deep within
the earth.

How black do you want
your paint?

3
I do not want
to consult the disctionary
for words about black,
I know those one-sided words
already: a black heart, a black mood,
a black day, a blunt black-jack—

I keep brooding instead
over my daughter’s love for black—

How when she was not quite three
and the blond children teased her
for having brown hair,
she was only angered
by their inaccuracy.
‘This is not brown!’ she screamed
holding up a fistful of her hair.
‘It’s black!
My hair is black, black—
Not brown!’

As if to say
she knew her colors well.
She no longer confused orange with red,
indigo with violet,
or brown with black.
She could understand light green, dark green,
yellow, blue, she learned
the names so quickly.

4
Now I keep turning back to you, Frida—
Nothing is black
but how you loved your black hair
that’s not really black
and how many different black strokes
you found (when nothing is black)
to pull out every shade
of blackness
from your hair, your self—

Who speaks of the strong currents
streaming through the legs, the breasts
of a pregnant woman
in her fourth month?

She’s young, this is her first time,
she’s slim and the nausea has gone.
Her belly’s just starting to get rounder
her breasts itch all day,

and she’s surprised that what she wants
is him
inside her again.
Oh come like a horse, she wants to say,
move like a dog, a wolf,
become a suckling lion-cub—

Who speaks of the green coconut milk that seals
her well, yet flows so she is wet
from his softest touch?

Who understands the logic
behind this desire?
Who speaks of the rushing tide
that awakens
her slowly increasing blood—?
And the hunger
raw obsessions beginning
with the shape of asparagus:
sun-deprived white and purple-shadow-veined,
she buys three kilos
of the fat ones, thicker than anyone’s fingers,
she strokes the silky heads,
some are so jauntily capped…
even the smell pulls her in—