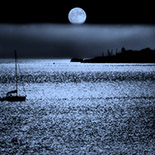 Best was a contributor to Francis Davison’s Poetical Rapsodie (1608). The first edition of that anthology contains two pieces by Best, A Sonnet of the Sun (eighteen lines) and A Sonnet of the Moon. To the third edition (1611) he contributed An Epitaph on Henry Fourth, the last French King, An Epitaph on Queen Elizabeth, Union’s Jewell, ‘A Panegyrick to my Sovereign Lord the King,’ and a few other pieces.

OF THE MOON
Charles Best

Look how the pale queen of the silent night
Doth cause the ocean to attend upon her,
And he, as long as she is in his sight,
With her full tide is ready her to honor.
But when the silver wagon of the moon
Is mounted up so high he cannot follow,
The sea calls home his crystal waves to moan,
And with low ebb doth manifest his sorrow.
So you that are the sovereign of my heart
Have all my joys attending on your will;
My joys low-ebbing when you do depart,
When you return their tide my heart doth fill.
So as you come and as you do depart,
Joys ebb and flow within my tender heart.