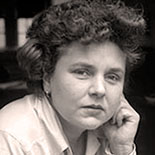 Elizabeth Bishop (February 8, 1911 – October 6, 1979) was an American poet, short-story writer, and recipient of the 1976 Neustadt International Prize for Literature.

Bishop was the Poet Laureate of the United States from 1949 to 1950, the Pulitzer Prize winner for Poetry in 1956 and the National Book Award winner in 1970.

I caught a tremendous fish
and held him beside the boat
half out of water, with my hook
fast in a corner of his mouth.
He didn’t fight.
He hadn’t fought at all.
He hung a grunting weight,
battered and venerable
and homely. Here and there
his brown skin hung in strips
like wallpaper,
and its pattern of darker brown
was like wallpaper:
shapes like full-blown roses
stained and lost through age.
He was speckled with barnacles,
fine rosettes of lime,
and infested
with tiny white sea-lice,
and underneath two or three
rags of green weed hung down.
While his gills were breathing in
the terrible oxygen
—the frightening gills,
fresh and crisp with blood,
that can cut so badly—
I thought of the coarse white flesh
packed in like feathers,
the big bones and the little bones,
the dramatic reds and blacks
of his shiny entrails,
and the pink swim-bladder
like a big peony.
I looked into his eyes
which were far larger than mine
but shallower, and yellowed,
the irises backed and packed
with tarnished tinfoil
seen through the lenses
of old scratched isinglass.
They shifted a little, but not
to return my stare.
—It was more like tipping
of an object toward the light.
I admired his sullen face,
the mechanism of his jaw,
and then I saw
that from his lower lip
—if you call it a lip—
grim, wet, and weapon like,
hung five old pieces of fish-line,
or four and a wire leader
with the swivel still attached,
with all their five big hooks
grown firmly in his mouth.
A green line, frayed at the end
where he broke it, two heavier lines,
and a fine black thread
still crimped from the strain and snap
when it broke and he got away.
Like a medals with their ribbons
frayed and wavering,
a five-haired beard of wisdom
trailing from his aching jaw.
I stared and stared
and victory filled up
the little rented boat,
from the pool of bilge
where oil had spread a rainbow
around the rusted engine
to the bailer rusted orange,
the sun-cracked thwarts,
the oarlocks on their strings,
the gunnels—until everything
was rainbow, rainbow, rainbow!
And I let the fish go.

I AM IN NEED OF MUSICElizabeth Bishop

I am in need of music that would flow
Over my fretful, feeling fingertips,
Over my bitter-tainted, trembling lips,
With melody, deep, clear, and liquid-slow.
Oh, for the healing swaying, old and low,
Of some song sung to rest the tired dead,
A song to fall like water on my head,
And over quivering limbs, dream flushed to glow!

There is a magic made by melody:
A spell of rest, and quiet breath, and cool
Heart, that sinks through fading colors deep
To the subaqueous stillness of the sea,
And floats forever in a moon-green pool,
Held in the arms of rhythm and of sleep.

The art of losing isn’t hard to master;
so many things seem filled with the intent
to be lost that their loss is no disaster.

Lose something every day. Accept the fluster
of lost door keys, the hour badly spent.
The art of losing isn’t hard to master.

Then practice losing farther, losing faster:
places, and names where it was you meant
to travel. None of these will bring disaster.

Lost my mother’s watch. And look! my last, or
next-to-last, of three loved houses went.
The art of losing isn’t hard to master.

I lost two cities, lovely ones. And, vaster,
some realms I owned, two rivers, a continent.
I miss them, but it wasn’t a disaster.

—Even losing you (the joking voice, a gesture
I love) I shan’t have lied. It’s evident
the art of losing’s not too hard to master
though it may look like (Write it!) disaster.