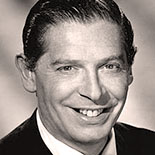 As the host of NBC’s Texaco Star Theater (1948–55), he was the first major American television star and was known to millions of viewers as “Uncle Miltie” and “Mr. Television” during TV’s golden age.