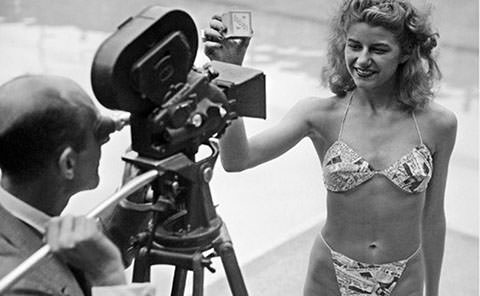 Micheline Bernardini (born December 1, 1927) was a French nude dancer at the Casino de Paris before agreeing to model on July 5, 1946 Louis Réard’s two-piece swimsuit, which he called the bikini, named days after the first above ground atomic test in the Bikini Atoll.

Designer Louis Réard could not find a fashion model willing to showcase his revealing design for a two-piece swimsuit, so he hired Bernardini, an 18-year-old nude dancer from the Casino de Paris, as his model. He introduced his design, a two-piece swimsuit with a g-string back made out of 30 square inches (194 cm2) of cloth with newspaper type pattern, which he called a bikini, at a press conference at the Piscine Molitor, a popular public pool in Paris in July 1946.

Photographs of Bernardini and articles about the event were widely carried by the press. The International Herald Tribune alone ran nine stories on the event. The bikini was a hit, especially among men, and Bernardini received over 50,000 fan letters.