The Folies Bergère is a cabaret music hall, located in Paris, France. Established in 1869, the house was at the height of its fame and popularity from the 1890s’ Belle Époque through the 1920s’ Années folles. The institution is still in business, and is always a strong symbol of French and Parisian life.

In 1882, Édouard Manet painted his well-known painting A Bar at the Folies-Bergère which depicts a bar-girl, one of the demimondaines, standing before a mirror. 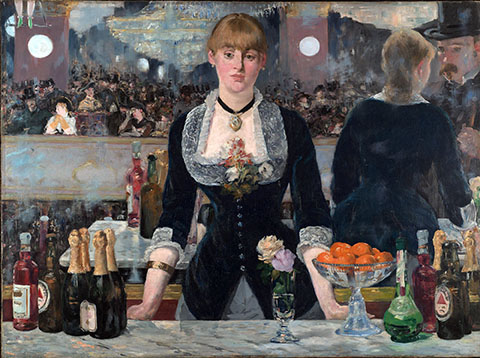 In 1918, Paul Derval (1880–1966) made his mark on the revue. His revues were to feature extravagant costumes, sets and effects, and his “small nude women”. Derval’s small nude women would become the hallmark of the Folies. During his 48 years at the Folies, he launched the careers of many French stars including Maurice Chevalier, Mistinguett, Josephine Baker, Fernandel and many others. In 1926, Josephine Baker, an African-American expatriate singer, dancer, and entertainer, caused a sensation at the Folies Bergère in a new revue, La Folie du Jour, in which she danced a number Fatou wearing a costume consisting of a skirt made of a string of artificial bananas and little else. Her erotic dancing and near nude performances were renowned. The Folies Bergère catered to popular taste. Shows featured elaborate costumes; the women’s were frequently revealing, practically leaving them naked, and shows often contained a good deal of nudity. Shows also played up the “exoticness” of persons and objects from other cultures, obliging the Parisian fascination with the négritude of the 1920s. 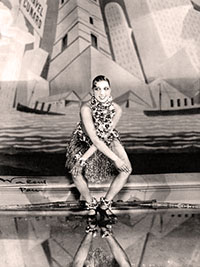 In 1936, Derval brought Josephine Baker from New York to lead the revue En Super Folies. Michel Gyarmathy, a young Hungarian arrived from Balassagyarmat, his hometown, designed the poster for En Super Folies, a show starring Josephine Baker in 1936. This began a long love story between Michel Gyarmathy, Paris, the Folies Bergère and the public of the whole world which lasted 56 years. The funeral of Paul Derval was held on 20 May 1966. He was 86 and had reigned supreme over the most celebrated music hall in the world. His wife Antonia, supported by Michel Gyarmathy, succeeded him. In August 1974, the Folies Antonia Derval passed on the direction of the business to Hélène Martini, the empress of the night (25 years earlier she had been a showgirl in the revues). This new mistress of the house reverted to the original concept to maintain the continued existence of the last music hall which remained faithful to the tradition.