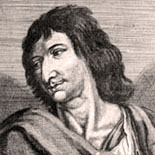 In fictional works about his life he is featured with an overly large nose, which people would travel from miles around to see. Portraits suggest that he did have a big nose, though not nearly as large as described in works about him. Cyrano’s work furnished models and ideas for subsequent writers.

In 1897, the French poet Edmond Rostand published a play, Cyrano de Bergerac, on the subject of Cyrano’s life. This play, by far Rostand’s most successful work, concentrates on Cyrano’s love for the beautiful Roxane, whom he is obliged to woo on behalf of a more conventionally handsome but less articulate friend, Christian de Neuvillette.

The play has been adapted for cinema several times, notably in 1990 with Gérard Depardieu in the title role. The 1990 dialogue is in French with subtitles written by Anthony Burgess in rhymed couplets, mirroring the form of the dialogue in the original play. The most famous film version in English is the 1950 film, with José Ferrer in the title role, a performance for which he won the Academy Award for Best Actor. Steve Martin wrote and starred in a contemporary retelling, Roxanne, earning himself the Writers Guild of America Award for Best Adapted Screenplay in 1988.