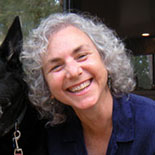 Ellen Bass (born 1947) is an American poet and co-author of The Courage to Heal.

At gate C22 in the Portland airport
a man in a broad-band leather hat kissed
a woman arriving from Orange County.
They kissed and kissed and kissed. Long after
the other passengers clicked the handles of their carry-ons
and wheeled briskly toward short-term parking,
the couple stood there, arms wrapped around each other
like he’d just staggered off the boat at Ellis Island,
like she’d been released at last from ICU, snapped
out of a coma, survived bone cancer, made it down
from Annapurna in only the clothes she was wearing.

Neither of them was young. His beard was gray.
She carried a few extra pounds you could imagine
her saying she had to lose. But they kissed lavish
kisses like the ocean in the early morning,
the way it gathers and swells, sucking
each rock under, swallowing it
again and again. We were all watching—

passengers waiting for the delayed flight
to San Jose, the stewardesses, the pilots,
the aproned woman icing Cinnabons, the man selling
sunglasses. We couldn’t look away. We could
taste the kisses crushed in our mouths.

But the best part was his face. When he drew back
and looked at her, his smile soft with wonder, almost
as though he were a mother still open from giving birth,
as your mother must have looked at you, no matter
what happened after—if she beat you or left you or
you’re lonely now—you once lay there, the vernix
not yet wiped off, and someone gazed at you
as if you were the first sunrise seen from the Earth.
The whole wing of the airport hushed,
all of us trying to slip into that woman’s middle-aged body,
her plaid Bermuda shorts, sleeveless blouse, glasses,
little gold hoop earrings, tilting our heads up.

IF YOU KNEW
Ellen Bass

What if you knew you’d be the last
to touch someone?
If you were taking tickets, for example,
at the theater, tearing them,
giving back the ragged stubs,
you might take care to touch that palm,
brush your fingertips
along the life line’s crease.
When a man pulls his wheeled suitcase
too slowly through the airport, when
the car in front of me doesn’t signal,
when the clerk at the pharmacy
won’t say Thank you, I don’t remember
they’re going to die.
A friend told me she’d been with her aunt.
They’d just had lunch and the waiter,
a young gay man with plum black eyes,
joked as he served the coffee, kissed
her aunt’s powdered cheek when they left.
Then they walked half a block and her aunt
dropped dead on the sidewalk.
How close does the dragon’s spume
have to come? How wide does the crack
in heaven have to split?
What would people look like
if we could see them as they are,
soaked in honey, stung and swollen,
reckless, pinned against time?

WHEN YOU RETURN
Ellen Bass

Fallen leaves will climb back into trees.
Shards of the shattered vase will rise
and reassemble on the table.
Plastic raincoats will refold
into their flat envelopes. The egg,
bald yolk and its transparent halo,
slide back in the thin, calcium shell.
Curses will pour back into mouths,
letters un-write themselves, words
siphoned up into the pen. My gray hair
will darken and become the feathers
of a black swan. Bullets will snap
back into their chambers, the powder
tamped tight in brass casings. Borders
will disappear from maps. Rust
revert to oxygen and time. The fire
return to the log, the log to the tree,
the white root curled up
in the un-split seed. Birdsong will fly
into the lark’s lungs, answers
become questions again.
When you return, sweaters will unravel
and wool grow on the sheep.
Rock will go home to mountain, gold
to vein. Wine crushed into the grape,
oil pressed into the olive. Silk reeled in
to the spider’s belly. Night moths
tucked close into cocoons, ink drained
from the indigo tattoo. Diamonds
will be returned to coal, coal
to rotting ferns, rain to clouds, light
to stars sucked back and back
into one timeless point, the way it was
before the world was born,
that fresh, that whole, nothing
broken, nothing torn apart.