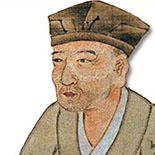 Matsuo Basho (1644 – November 28, 1694), born Matsuo Kinsaku), was the most famous poet of the Edo period in Japan. During his lifetime, Bashō was recognized for his works in the collaborative haikai no renga form; today, after centuries of commentary, he is recognized as the greatest master of haiku (at the time called hokku). His poetry is internationally renowned, and in Japan many of his poems are reproduced on monuments and traditional sites.

Bashō was introduced to poetry at a young age, and after integrating himself into the intellectual scene of Edo (modern Tokyo), he quickly became well known throughout Japan. He made a living as a teacher, but renounced the social, urban life of the literary circles and was inclined to wander throughout the country, heading west, east, and far into the northern wilderness to gain inspiration for his writing. His poems were influenced by his firsthand experience of the world around him, often encapsulating the feeling of a scene in a few simple elements.

The Temple bell stops —but the sound keeps comingout of flowers.

How marvelous the man is
who can see a lightning flash
and not think, “Life is short!”