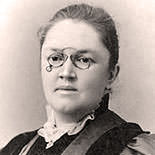 A lifelong, active Republican, Bates broke with the party to endorse Democratic presidential candidate John W. Davis in 1924 because of Republican opposition to American participation in the League of Nations. She said: “Though born and bred in the Republican camp, I cannot bear their betrayal of Mr. Wilson and their rejection of the League of Nations, our one hope of peace on earth.”

Bates never married. In 1910, when a colleague described “free-flying spinsters” as “fringe on the garment of life”, Bates answered: “I always thought the fringe had the best of it. I don’t think I mind not being woven in.”

Bates lived in Wellesley with Katharine Coman, who was a history and political economy teacher and founder of the Wellesley College school Economics department. The pair lived together for twenty-five years until Coman’s death in 1915. In 1922, Bates published Yellow Clover: A Book of Remembrance, a collection of poems written “to or about my Friend” Katharine Coman, some of which had been published in Coman’s lifetime.

Some describe the couple as intimate lesbian partners, citing as an example Bates’ 1891 letter to Coman: “It was never very possible to leave Wellesley [for good], because so many love-anchors held me there, and it seemed least of all possible when I had just found the long-desired way to your dearest heart…Of course I want to come to you, very much as I want to come to Heaven.” Others contest the use of the term lesbian to describe such a “Boston marriage”. Writes one: “We cannot say with certainty what sexual connotations these relationships conveyed. We do know that these relationships were deeply intellectual; they fostered verbal and physical expressions of love.”

The first draft of “America the Beautiful” was hastily jotted down in a notebook during the summer of 1893, which Bates spent teaching English at Colorado College in Colorado Springs, Colorado. Later she remembered:

One day some of the other teachers and I decided to go on a trip to 14,000-foot Pikes Peak. We hired a prairie wagon. Near the top we had to leave the wagon and go the rest of the way on mules. I was very tired. But when I saw the view, I felt great joy. All the wonder of America seemed displayed there, with the sea-like expanse.

The words to her only famous poem first appeared in print in The Congregationalist, a weekly journal, for Independence Day, 1895. The poem reached a wider audience when her revised version was printed in the Boston Evening Transcript on November 19, 1904. Her final expanded version was written in 1913. When a version appeared in her collection America the Beautiful, and Other Poems (1912), a reviewer in the New York Times wrote: “we intend no derogation to Miss Katharine Lee Bates when we say that she is a good minor poet.”

O beautiful for spacious skies
For amber waves of grain
For purple mountain majesties
Above the fruited plain!
America! America!
God shed his grace on thee
And crown thy good with brotherhood
From sea to shining sea!

O beautiful for pilgrim feet
Whose stern impassioned stress
A thoroughfare of freedom beat
Across the wilderness!
America! America!
God mend thine every flaw
Confirm thy soul in self-control
Thy liberty in law!

O beautiful for heroes proved
In liberating strife
Who more than self their country loved
And mercy more than life!
America! America!
May God thy gold refine
Till all success be nobleness
And every gain divine!